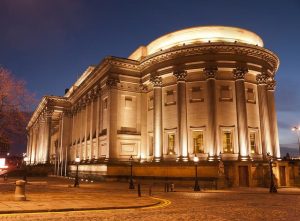 Recognised as one of the finest neoclassical buildings in the world, St George’s Hall has earned a stellar reputation as a landmark venue for weddings, corporate events, live performances, exhibitions, tours and immersive experiences since its official reopening by King Charles III (then known as Prince Charles) back in 2007.

Situated opposite Lime Street station, this history-steeped Grade I listed building forms an intrinsic part of Liverpool’s St George’s Quarter and provides a magnificent welcome to the city, reflecting the pride and passion of its Victorian creators.

Its iconic exterior has impressed many passing residents and commuters, but inside is where the real intrigue happens… Once described by the BBC as “…possibly the only building where you could be tried for murder, have a ball or listen to a concert all under one roof”, it is testament to how unique St George’s Hall, both in concept and design.

The Concert Room was once described by Charles Dickens as “the most impressive room in the world”, while the Great Hall is home to an impressive 30,000 Minton tile floor (concealed for most of the year), as well as a decorative barrel vaulted ceiling and a 7,737 piped Willis organ.

If you have yet to visit St George’s Hall in person, there’s still a good chance that you’ve seen it either on your television or at the cinema. Over the years, our unique building has acted as a filming location for productions such as In the Name of the Father, Brookside, Coronation Street, Peaky Blinders, Fantastic Beasts and Where to Find Them, Tin Star, The Irregulars, BBC’s War of the Worlds, Tolkien, and The Batman to name just a few.

So whether you are in search of a place to marry, or whether you want to host a private or commercial event, we would love to hear from you! Or perhaps you would just like to visit us? If so, we host a variety of ticketed events, as well as heritage-based experiences, which are accessible via our Visitor Entrance, along with our Homebaked Bakery cafeteria (situated on St John’s Lane, opposite Queen Square Bus Station). 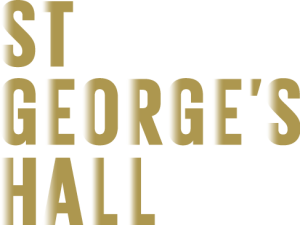